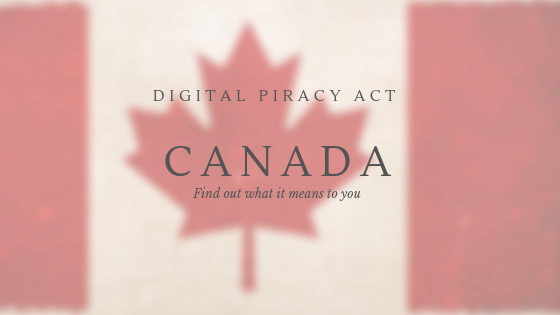 If you download music, movies or TV shows you need to be informed of the new laws and how they effect you.

Starting January 2, 2015, the Copyright Modernization Act became law in Canada.  While the bill covers many topics, the one we’ll focus on is the one that most of us know and are guilty of: downloading of copyrighted material.

The law, in it’s current form doesn’t really change things that much from how things operated in Canada before.  For years now, most ISP’s have passed on DMCA (digital millennium copyright act) notices to their users who were noted downloading copyrighted material by the owner of the material.  Nothing was really done by the isp, they simply passed on the notice and weren’t under any obligation to do anything more than that.

If you download Movies or TV shows in Canada, you can face a fine of $5000.  Use a VPN service for just a few cents a day to cover your tracks and protect yourself.

This is where the new law starts to change things.  Any notice now sent by an isp must be retained by them for at least six months, and up to one year if court action is taken against the downloader.  That means, at least to me, that these notices are becoming more than just a warning.  Note that there is no provision in the law compelling an isp to automatically hand over your details to the copyright owner.  But it is only a matter of time before one or more copyright holders subpoena isp’s to release personal information.

There are two cases previously in Canada where copyright holders have tried to have personal information released; one case was dismissed, the other is still before the courts.  It is my opinion that with the new law in effect that more copyright holders are going to go to court to have this private information released in order to sue the downloader.

Compared to the US, the maximum fines in Canada for illegal downloads is downright reasonable.  The maximum fine under the new law is $5,000 or up to $20,000 if it can be proved that the downloads were for commercial or monetary gain. The fine amount  is in total, not per download.  Compare that to some high profile and idiotic cases in the US where one woman was fined 1.9 MILLION dollars for downloading 24 songs.

The good news we may think about the relatively low fine amount is that copyright holders won’t bother spending money in court when they likely won’t even cover their legal fees.  The reality, in my opinion is quite a bit different.  Movie studios and record labels have deep pockets.  To them, it is not about making money on the lawsuit, it is about getting publicity in an effort to curb illegal downloads.  If they have to spend $50,000 to get $5,000 they will gladly do it to get the word out.  The first copyright holder to successfully subpoena an isp to release the personal information of a downloader will literally open the floodgates and if this happens I predict there to be dozens if not hundreds of similar lawsuits in the courts.  Canada could become very unfriendly indeed.

Why use a VPN?

Read how using a VPN can protect you

One copyright lawyer that was interviewed stated that he was concerned that copyright holders when sending out notices of illegal downloads through the customer’s isp may change the wording of the notice to include something like “Please forward us $3,000 and we will consider this matter closed; otherwise we will consider suing you under the Copyright Modernization Act“.  According to the lawyer, there is no obligation to pay any amount of money unless you are being sued (and have lost).  But this could scare a lot of people nonetheless and inevitably some of those are going to pay.  Opening yet another floodgate of possibilities.

Hopefully none of the scenarios I’ve presented come to pass but I think it’s inevitable.  With the loss of many of the larger torrent sites such as Isohunt and Thepiratebay it is clear that change is upon us.

So what can you do to protect yourself?  There are two things you can do.  One is that you could stop downloading any copyrighted material.  The other is simply purchasing the services of a trusted VPN service.  Many of these services allow for anonymous downloading of torrent files.  They keep no logs so even if they were subpoenaed by a copyright holder, they couldn’t tell them who you are because they have no way of knowing.  Note though that some VPN services don’t allow for torrent downloads, they are only for web browsing.

For the past year, I have personally been using Torguard.  I started using them after receiving one of those dreaded DMCA notices one morning.  I have been more than pleased with their service and in fact it seems to be getting better, faster and more stable as time goes on.
We have discount coupons for several other well known and respected VPN services as well you can check them out here.
So in a nutshell, you may well be safe continuing on with your downloads as normal, at least for now.  But if you’re like me, you’d rather be safe than sorry.  For peace of mind either invest a couple dollars a month in a good VPN service or stop downloading copyrighted materials.  You’ll thank me later.