Surfshark VPN Review - Can a rookie hit a home run? Read our in depth review

Can a rookie hit a homerun?

We are pleased to present our review of Surfshark vpn. Is the new kid on the block ready to take on the competition? We think so. Check out our detailed review and decide for yourself.

Vpn’s are here to protect our privacy so if a company keeps logs or is in an area where they can be compelled by law to hand over that information then what is the point?

Surfshark has a strict no-logging policy. And the company is located in the British Virgin Islands, a jurisdiction that has no data retention laws.

What does this mean to you? Simply put, what you do on Surfshark is your business. If for instance, you download a movie and the maker wants to come after you for damages, too bad. There are no logs, there are no records.

All I can say is WOW. Surfshark is fast. In fact, the fastest service I’ve ever tested.Here are my results BEFORE Surfshark:

Here are my results RUNNING Surfshark:

The download speed was extremely fast and though it was about a 9% drop in speed, that difference would be unnoticeable in real life. The upload speed changed considerably but that isn’t that big of a concern and cable connections like mine are notorious for having abysmal upload rates.

Testing with Netflix and Youtube showed no lag or stutter.

Connecting to servers was extremely fast as well. Even connecting to servers a long distance from me was no problem. Though I’d suggest leaving the setting to ‘optimal’ and letting them figure it out for you unless you need to use a server in a specific location.

I tested both the Chrome extension and the Windows app. Both gave me similar results although the Chrome app seems to connect to the server slightly faster.

Some vpn’s do not allow the use P2P services. Other services promote it heavily. Surfshark is the latter.

If you like to download content via torrents, you probably already received an email or ten from your isp about ‘illegal’ downloads. With Surfshark, those concerns are gone.

I tested downloading and sharing several .torrent files and not surprisingly found the speeds to be fast and consistent with the speed tests I’d done previously.

One of the big features of a vpn service is being able to stream services like Netflix, Hulu and BBC from outside of the areas that it is allowed. Many of these services – especially Netflix – have gone to great lengths to stop vpn’s from being able to access their services.

I tested Netflix from six servers in three countries: US, Canada and Australia. All servers connected without any problems. Streaming was fast with no lag, even Australia which is half a world away from me.

I also tested BBC iPlayer and it worked fine as well with no noticeable lag.

Surfshark is one of the few services I’ve tested that hasn’t had at least one server banned from one of the streaming services so because of that, I give it a 10/10.

Here is one of the few places Surfshark loses a few points. Since they are fairly new, they do not have native apps for all platforms like most of their longstanding competition do.

Surfshark has native apps or extensions for:

That should cover it for the vast majority of people but notably, they do not have a native app for MacOS nor Linux. They do however support both and have instructions on how to set them up manually. They have a Windows app which I tested and it works fine. It is marked as a beta on their site though so not sure if there are any bugs or quirks that I didn’t find.

They also have router support via some setup tutorials.

The interface of the apps is clean and minimalist but all of the settings you’d expect are neatly tucked away behind some tabs. I would guess that these apps will grow and mature with time but are completely usable as is.

This rating was a bit of a struggle and maybe a little harsh given the fact that they will cover probably 90% of their prospective customers. But they have some work to do right now and I will update the review in the future as this improves hopefully.

At face value, it is hard to fault Surfshark for their location list. They boast 500+ servers in 50+ locations and cover a large chunk of the populated areas around the globe.

They do however have a long ways to go compared to some of their more mature competition. As mentioned above under Speed, their servers all seem blazingly fast so that is definitely a plus in their favor.

This is another rating that I will likely have to upgrade in the near future as they seem to be adding servers and locations at a breakneck speed.

Surfshark uses OpenVPN and IKEv2 protocols with 256 bit AES encryption. This is ideal for security as well as battery savings on mobile devices. Hard to find any fault here.

Their Windows app has a kill switch feature which is a must-have. This will kill your connection if it detects a loss of vpn security. Without this feature, downloading torrents for instance can leave you vulnerable.

They also have a feature they call ‘cleanweb’ which is supposedly an ad and malware blocker. I didn’t test this feature as I am already covered with other software.

Accepting CryptoCurrency is another big plus. Some people that want to be completely anonymous don’t want to pay via credit card or Paypal since there is a paper trail. Using crypto currency solves this problem.

They lost a point here as both the kill switch and cleanweb are disabled by default. It’s a simple click to go into the settings and turn them on but I have to question why these security tools are not enabled upon install. It might be nitpicky, but most of us are in a hurry to get going and may not look into the settings at all.

I tested Surfshark’s support via online chat and email. Online chat response was very fast – well under 30 seconds. I asked some random pre-purchase questions and it was clear that the agent I was chatting with knew his stuff and wasn’t just pasting from pre-written responses.

Email response was fast as well at around three minutes. And this was at 10pm my local time. 1am if their support is in the British Virgin Islands where the company is located. Either way, still impressive.

I can’t find anything to fault them on in regards to support but this is another of those categories that I never give a full rating on. Sorry Surfshark – you deserve a 10 but I just can’t do it.

Cost should naturally be one of the least important criteria when looking for a vpn service. Let’s face it, if a service can’t pass the previous 8 tests but they have a great price then what is the point?

If you use my link you can get Surfshark for 83% off or $1.99/month on a two year plan. That is an excellent value.

They lose a little bit of score as their 1 month and 12 months prices are ok but not outstanding. Not surprisingly, they give little or no discount on monthly plans which is fine with me as I would never sign up to a service like this for such a short time.

Surfshark does not have a free trial but they do offer a full 30 day money-back guarantee which is one of the best in the business. It shouldn’t take more than a day or two to realistically decide if the service is right for you so they give ample time to decide.

Testing and reviewing Surfshark was a pleasant surprise. They are clearly trying hard to be a market leader and if they continue on this track, they will soon be one of the best known and well used services in their market.

I’m so pleased in fact with their product, service and support that they will likely become my go-to vpn from now on. Seeing as how I’ve been with my current provider for over 4 years, that is saying a lot.

Sure, they are still a little rough around the edges in a couple of areas. But none of those issues are major and none of them affect me or probably you either. If their few shortcomings are a show stopper for your particular needs then take a look at some our other reviews and choose another provider. Otherwise, choosing Surfshark is likely to be a choice you won’t regret. ​

Surfshark: Can a Rookie hit a home run? 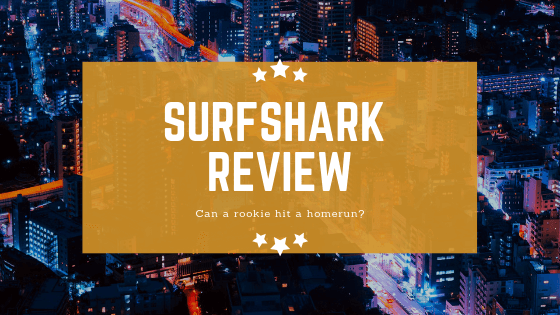 Check out our 9 point review of Surfshark VPN. Speed, locations, security and more are tested and rated. Don’t buy a vpn service without reading our guides!